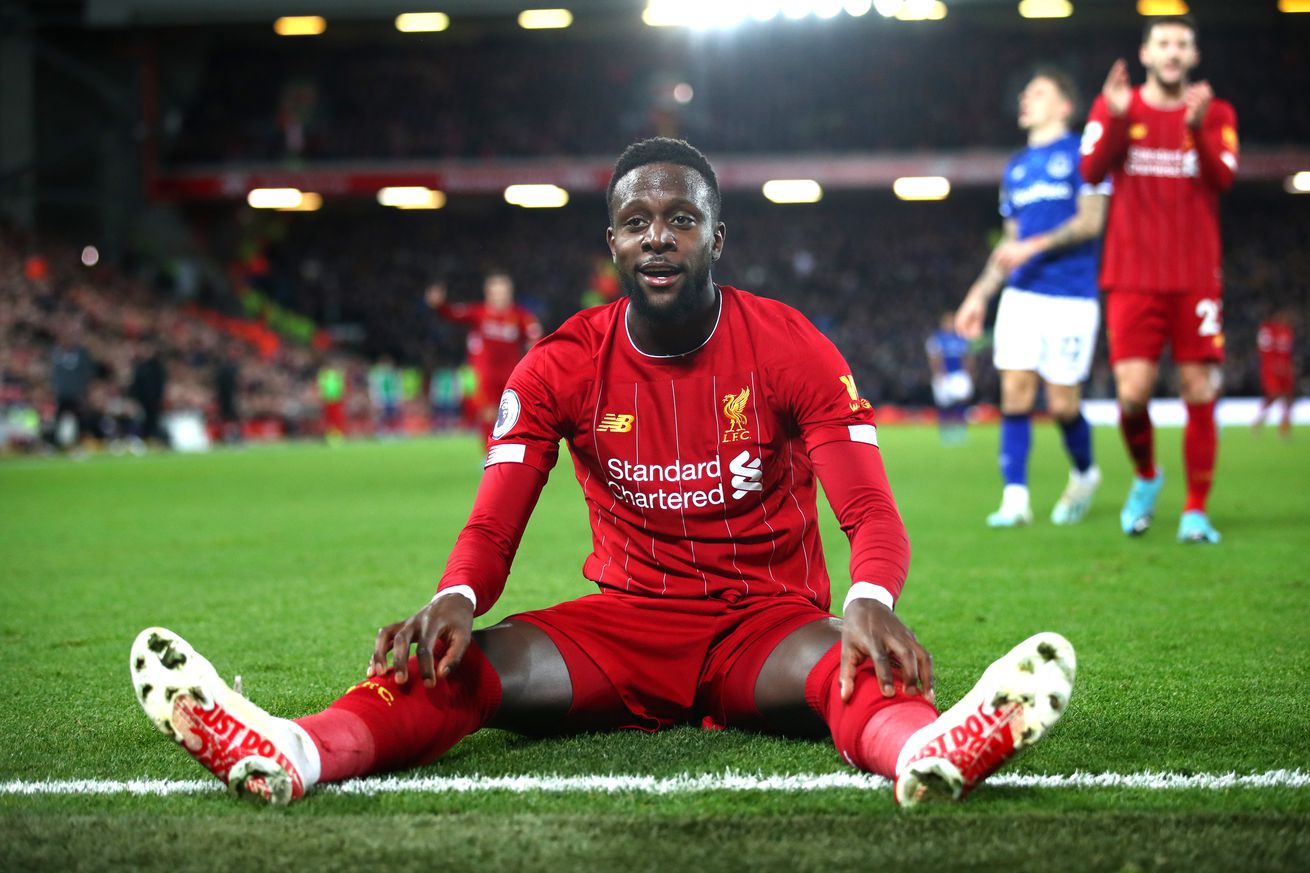 Jurgen Klopp rolls out a surprising line-up against Everton, leaving out Roberto Firmino and Mohamed Salah in favor of Everton Slayer Divock Origi and Power Cube Xherdan Shaqiri. On one hand, it’s a bold gamble. On the other, this side needed rotation. On Zaphod Beeblebrox’s third hand, if Klopp is going to run out players to be kicked by Everton, you might as well chuck in some backups. Soz, Adam Lallana.

Anyway, three points are on the line, and Liverpool can maintain a commanding lead in the title race if they collect them all against their cross-town foes.

Liverpool are on the front foot from the first minute, creating a couple of half-chances from runs in behind from Origi and Andy Robertson, respectively.

GOAL! Divock Origi does Everton dirty AGAIN! Sadio Mane leads a quick counter, playing a perfect ball in behind for Origi to latch onto. He catches Pickford out in no man’s land, and Divock calmly touches it around the England international keeper, slotting it into an empty net.

Liverpool are getting a lot of joy early with long balls over the top for Mane to chase down. There will be more goals for the Reds if they can keep hitting Everton on the break.

GOAL! Mane is the provider again on another lightning-quick break. Trent Alexander-Arnold pings a long pass into Mane, who in turn plays Shaqiri through in the box. Shaq slots with a first-time left-footed shot, poking it into the far corner past Pickford.

Goal. So much for the clean sheet. Everton score on a second ball off a corner. It’s a bit unlucky, though Lovren and Adrian both probably could have done better.

Liverpool need to calm down a bit. Some typical Derby “needle” has already boiled over a few times, and a red could be on the cards if they’re not careful. A few yellows should have already been dished out. So. Yeah.

GOAL! Origi makes it 3-1! It comes from a long ball over the top from Lovren. Divock takes a fantastic first touch to bring it down, and then side-foots it past Pickford. Brilliant!

Everton forced into their first change with just over thirty minutes gone, bringing Sidibe off for Bernard.

GOAL! And this one came off a corner…for Everton! Mane fights off a challenge, and plays it to Trent in acres of space. Trent drives it forward, and releases a ball back to an on-rushing Mane at the perfect moment. Sadio buries his first-time effort, in the bottom near corner.

Goal. Well, that puts a damper on things. Just before the halftime whistle, Richarlison gets on the end of a cross, pulling one back for the visitors. A couple of Reds simply switched off before the half.

Who had six goals at the half? Not me. All four of Liverpool’s goals have been of the utmost quality. And Everton look like they could concede more. That said, maybe Kloppo should look to Henderson and/or Firmino to gain some control of the match in the second half, and see this one out.

It’s been a fairly uneventful opening fifteen to the half, which, when you’re leading 4-2, can only be a good thing. Klopp has yet to make any changes, but the Reds have been a lot more patient and in control, both in and out of possession.

With just over seventy minutes gone, Klopp brings Jordan Henderson and Roberto Firmino on for Lallana and Origi. The Kop erupts into a chorus of “Si Senor!”

The half continues to be uneventful, but Sadio Mane is also a player who can create excitement out of literally nothing. With about ten to go in the half, he latched onto a long ball over the top from Jordan Henderson, and honestly should have done better with the effort, but pushed it just wide of the target. A few minutes later, Mane is played through for a 1v1, rounds the keeper, but cannot get the shot away.

GOAL! Gini makes it 5! Firmino is played through wide, drives into the box, and then cuts it back for his Dutch teammate. Gini picks his spot and buries it in the far corner!

In recent years, there have been two types of Derby: fun and frustrating. This was definitely the former. Liverpool record their biggest win of the season against their rivals at home to go 8 points clear at the top (and send the Blues into the relegation zone).