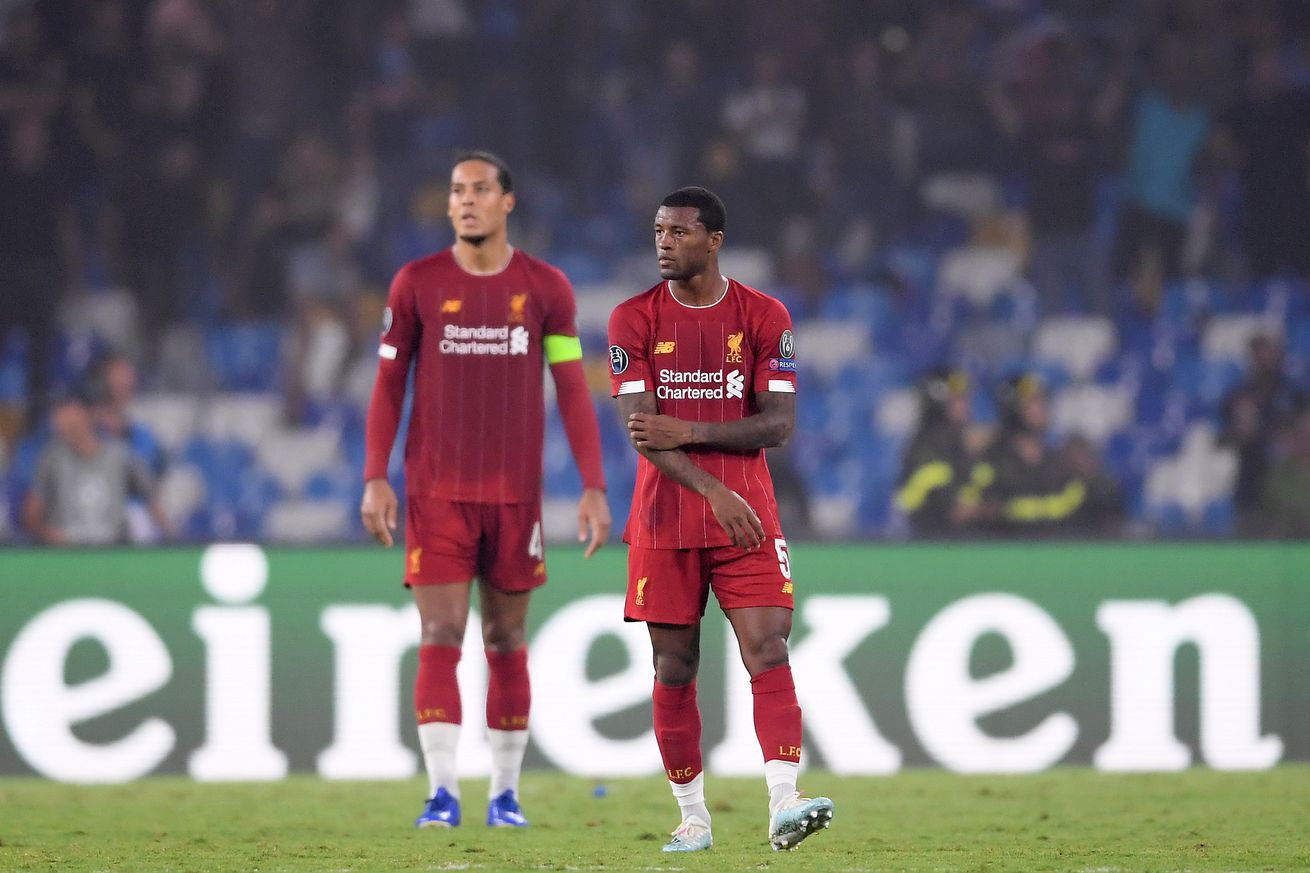 With a loss to Napoli in the books, we dig a little deeper into what it means for Liverpool.

Liverpool fall to Napoli away. The song remains the same. I hate this song.

This particular iteration of the tie is particularly frustration if only for the fact that barring the result – and the one major controversial moment that contributed most to it – it was a rather entertaining affair. Both sides came out looking to win. Both sides showed extreme quality on both sides of the pitch. And for a long spell, it looked like a track meet out there.

Unfortunately, Lady Luck – and VAR – decided to leave on the arm of Napoli and we’re left a bit despondent. Now join us as we examine some of the narratives, tactics, reactions, and questions Liverpool will be dealing with and the fans will be talking about in the aftermath.

Kalidou Koulibaly: When you’re a centre-back facing off with Liverpool’s front three, you typically need to have a particularly good day at the office to come away unscathed. When you play for a team whose attacking ethos and offensive line-up consistently sees you and your defensive partners get run at by a breaking Mohamed Salah and partners, you’re going to have to play absolutely out of your skin.

And so, Kalidou Koulibaly. Consistently linked with €100m exits from italy, the Ghanaian showed once again exactly why he’s one of very few defenders alive who deserved to sit in the same price range as Virgil van Dijk. The 28-year old was given very difficult conditions in which to do his job, and he did so stellarly.

Slowing down attacks until reinforcements could arrive, blocking shots, making tackles, and — on the one occasion when Salah got the better of him — being large enough that by the time the Egyptian had gotten around him Manolas was in the way, Koulibaly did it all on Tuesday night, and was crucial in Napoli keeping all three points.

Adrián: The final scoreline doesn’t immediately suggest that Liverpool’s goalkeeper had a particularly good game, but right up until Napoli were gifted a penalty, the Spaniard was a big reason the Reds hadn’t conceded yet. Mimicking his Brazilian counterpart, the Alisson replacement produced a spectacular save at the beginning of the second half, soaring through the air to deny Dries Mertens from close range at the back post.

He won’t get the plaudits he would have if the Reds had taken a point or three back to Anfield, but the 32-year old once again showed that Liverpool made an excellent decision in picking him as their backup goalkeeper this summer.

VAR: Here at TLO, we desperately want to avoid becoming a VAR blog. There is something despairingly tedious about having to regurgitate the same discussions over and over again every week and yet given how the different footballing bodies insist on implementing the video assistant system, it seems we will have no choice.

So. Jose Callejon dived. That much is clear. He threw himself into the air with no intention of putting his feet on the ground, reaching only for contact with his opposing fullback. Luckily for him, Andrew Robertson had committed his feet enough that he was unable to get himself entirely out of the way despite his best efforts, so Callejon got the slight thigh-to-thigh contact he wanted, and Felix Brych blew his whistle. Cue VAR, who did nothing to rectify the matter.

The phrase “no clear and obvious error” is already becoming our least favourite thing in 2109.

Liverpool away in Europe: Outside the knockout stages, that is. Despite being reigning champions in the competition, this was Liverpool’s fourth consecutive away loss in the Champions League group stage. Sure, Jürgen Klopp’s Reds have been obscenely competent in the knockout stages, making it to the final in every one of the German’s European campaigns at the club, but there is little doubt that, ideally, the Merseysiders should make sure they win at least one away match this year, in order to avoid the sort of last-second heroics that saved their advancement last time around.

Then again, we are Liverpool, and we never do things the easy way.

Over the course of the past three seasons, Jürgen Klopp has attempted a number of experiments to his counterpressing set-up. Largely originating in the 4-3-3, adjustments have been made with regards to when and where to press the ball, and which players are to do so from which positions in order to produce a high rate of turnovers without suffering defensively.

One such experiment — discarded after a period of little success in early 2017/18 — consisted of pushing Jordan Henderson, at the time Klopp’s preferred DM, up past his midfield partners when the ball made its way past Liverpool’s frontline. In the Premier League, opposing sides quickly found ways to bypass this strategy, feeding the ball into the space left open by the captain, and getting to run at the Reds defense.

Tonight, the tactic made a return, but with Fabinho in the deepest midfield spot. As Napoli built their play from the back, the Brazilian would push aggressively into midfield, disrupting the Italians’ build-up before they could get the ball to their front four, none of which naturally drop into the central half-space. With seven tackles, four of which were made in the opposition’s half, and three only a few yards into his own, Fabinho was tremendously effective at shutting down attacking high up the pitch, despite nominally playing as a midfield anchor.

With quick turnarounds the norm in the coming three weeks, the Reds will enjoy having five days off, as a trip to Chelsea on Sunday is up next. The Blues suffered a 1-0 home defeat to Valencia tonight, and Frank Lampard will undoubtedly be looking to bounce back from such a deflating Champions League debut. The London side sit sixth in the table on eight points, having conceded the second most goals in the league thus far, and odds are, there will be goalmouth action at Stamford Bridge.