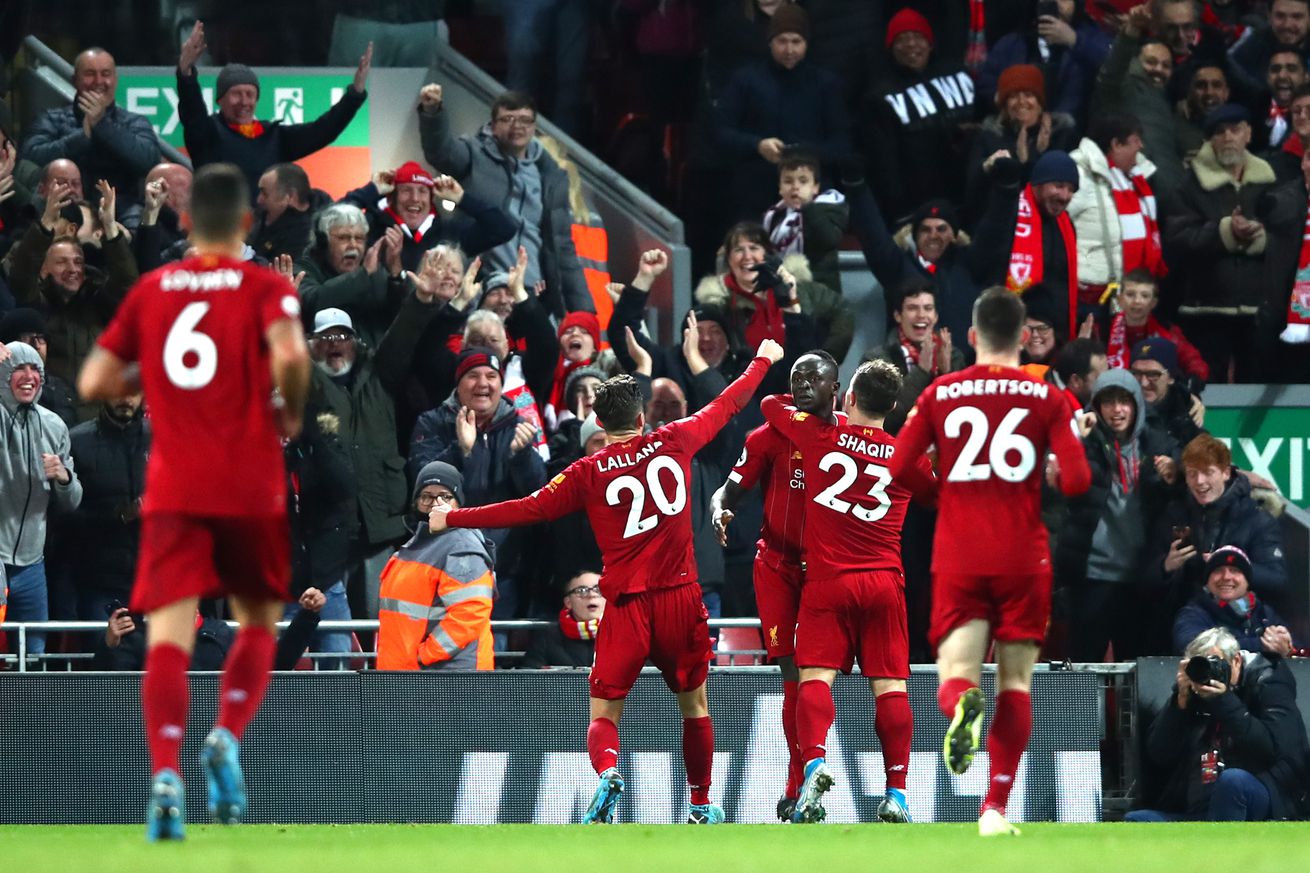 We dive into the Reds’ thumping win over their local rivals, looking for the hows and whys of it all.

The Reds remain top of the table, the run continues, and as Liverpool go 32 games unbeaten for the first time in the club’s history, we try and make sense of exactly why this match was among the most comfortable and impressive wins in that stretch.

Sadio Mané: Good heavens. This is Sadio’s world, the rest of us are just living in it. Coming off his 4th place finish in the Ballon d’Or ceremony on Monday, the 27-year old showed FIFA exactly how wrong they were to somehow place him outside the top three, behind Champions League quarter finalist Cristiano Ronaldo. Notching a goal — his 30th in 2019 — and two assists, the former Southampton man was absolutely electric, and at the center of everything the Reds created in attack.

Two missed sitters in the final stages of the match may have left a sour taste in the mouth of the Senegalese attacker, but Mané was outstanding on the night nonetheless, and continued to display why claims that he has been Liverpool’s best player this year are tough to dispute.

The Replacements: Liverpool Twitter was aflame with rage when the team sheets were announced before kickoff, and it was revealed that both Roberto Firmino and Mohamed Salah would start the match on the bench, replaced by Divock Origi and Xherdan Shaqiri. Incredibly, some even argued that Jürgen Klopp did not understand the importance of the derby.

Other fans noted Origi’s outstanding goalscoring record in big games — and against Everton — and as he tends to do with doubters, Klopp proved his detractors wrong. Big Div notched a gorgeous brace, while Xhaqiri got himself on the scoresheet for the first time since December 2018, looking as deadly as ever in a red shirt, even completing a pair of dribbles.

Even Adam Lallana contributed, sitting behind the front three, setting the pace for the Reds’ press, and forcing the Toffees into hopeful long balls from the back, essentially handing possession back to the hosts.

This Liverpool team has received some criticism for their refusal to add squad depth in the transfer window, and there is always a chance that gamble could still come back to bite them, but for now, the manager’s faith in the players currently at the club has been rewarded every time they have stepped out onto the pitch.

Marco Silva: Despite the amity that has been present on Merseyside in the past week, home fans couldn’t help but get a little dig in at the Everton manager at the clock wound down on the match and, quite possibly, on Silva’s time at Goodison park. The Toffees now sit 18th in the league, and while their performances haven’t necessarily suggested they should be battling relegation, their results and the manager’s inability to extract them from the talent he has on hand is damning.

In all likelihood, this was the last game of Silva’s tenure at Everton, and Liverpool won’t at all mind being the responsible party.

Jordan Pickford: Ever since he opened his mouth about the high-risk antics of his opposite number in a red shirt last season, things have been steadily going downhill for Pickford. His critical fumble at the death in last year’s winter derby was perhaps the most meme-able event of the entire Premier League season, and tonight, after having vowed to make amends for the blunder a year ago, the 25-year old conceded five goals from five shots on target, failing to record a single save.

His England job might still be relatively safe, but if we could offer the former Sunderland man some advice, it’d be to speak as little as possible ahead of his next trip to Anfield.

With no Fabinho to play the single pivot and Jordan Henderson being granted a well-earned rest, Klopp opted to go with the 4-2-3-1 on Wednesday night, and a double pivot of Georginio Wijnaldum and James Milner. With neither player possessing the combination of athleticism and defensive nous that allows the men they replaced to play the six alone, the double pivot allowed the pair added protection from ball carriers breaking through midfield.

The formation also fed into Liverpool’s second gambit of the night, playing Divock Origi as a spear head striker. Where Roberto Firmino will play with his back to goal and knit together the Reds’ attacking play, Origi constantly ran the channels like the 2008 Fernando Torres we enthusiastically compared him to a few years ago, threatening the space behind the Everton backline, while Adam Lallana drifted into pockets of space behind him, performing the hub duties normally reserved for Firmino.

As the Toffees’ central midfield pairing of Gylfi Sigurdsson and Tom Davies was both outnumbered and incapable of protecting the space in front of the defense, and the back five was designed to block off the wide areas where Liverpool usually generate their playmaking threat through the fullbacks, the backline was forced to push up high in order to not give up a massive amount of halfspace.

Given Michael Keane and Yerry Mina’s relative lack of pace and Liverpool’s assortment of proficient long passers, this situation allowed the hosts to get in behind the Everton backline again and again, with ample space for the attacker to move into. The Reds were happy to oblige their opponents, and created chance after chance by moving the ball quickly and vertically.

It was an encouraging adjustment made by Klopp and his coaching staff, no doubt having observed Everton’s five-man backline against Leicester at the weekend, and again showed not only that this Liverpool side have more than one avenue of attack, but also that their manager is a much sharper tack than most people give him credit for.

With four games played in the past 11 days, Liverpool now only have… ten games to go before they get a break of four days or more. Phew. This is probably all good and healthy. At any rate, a trip to Bournemouth on Saturday is first up, before the Reds go to Salzburg for a season-defining fixture to ensure their continued participation in this season’s Champions League. No pressure, lads!